“Amphetamines are a group of synthetic psychoactive drugs called central nervous system (CNS) stimulants” (CESAR). Stimulants cause the individual who takes them to experience increased energy and concentration while also having a decreased need for food and sleep. These drugs speed up the workings of the brain and, at high doses, can even cause a euphoric effect. The group of amphetamine drugs consists of several different types of substances, each which cause similar effects.

These drugs can be extremely beneficial in many ways, especially for individuals who suffer from disorders involving hyperactivity, narcolepsy, or problematic weight gain. Unfortunately, many people abuse these drugs and experience harmful and sometimes even deadly results.

What are the Different Types of Amphetamines? 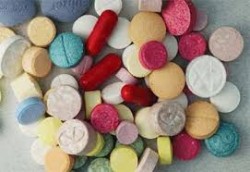 There are three different categories of amphetamines.

How Do Amphetamines Affect the Brain?

The effects of these drugs can be beneficial when they are taken in the right doses. For example, “common stimulants such as amphetamines… have chemical structures that are similar to certain key brain neurotransmitters including dopamine and norepinephrine” (NIDA for Teens). When an individual suffers from ADHD and has trouble concentrating, these drugs (when prescribed and taken at the right dosage) can have both a calming and focusing effect by releasing the specific chemicals mentioned above. These drugs can also give individuals with ADHD a way to concentrate their energy on the task at hand.

However, when a person takes amphetamines in extremely high doses, they can cause a strong euphoric high. Many individuals abuse them for this effect, but it is not the only one they cause. “When used as drugs of abuse and not under a doctor’s supervision, stimulants are frequently taken to: produce a sense of exhilaration, enhance self esteem, improve mental and physical performance, increase activity, reduce appetite, [and] extend wakefulness for prolonged periods” (DEA). Individuals who abuse these drugs chronically are likely to become addicted which can happen even more quickly when the drug is being smoked or injected.

Which Amphetamines Are Abused?

All types of amphetamines are abused for their effects. This is why those drugs which have medicinal purposes must be obtained by prescription only. Crystal meth, which is one of the most commonly abused illicit drugs, is particularly dangerous and can lead to addiction very quickly because of the methods of its abuse. According to the NIDA, “A 2009 report from the RAND Corporation noted that methamphetamine abuse cost the National approximately $23.4 billion in 2005.”

The common street names for specific amphetamines include:

What are the Effects of Amphetamine Use and Abuse?

Amphetamines cause many side effects, even when taken in therapeutic doses. Still, when a person takes high doses of these drugs chronically, this increases the chances for adverse physical and psychological effects. Common side effects include:

A person can lose everything to amphetamine abuse. Psychosis is another possible side effect of long-term abuse. A disorder that is similar to schizophrenia, stimulant-induced psychosis includes symptoms of extreme paranoia, hallucinations, picking at the skin, intense aggression, and homicidal or suicidal tendencies. Individuals who abuse these drugs even “risk… damage to brain cells,” which can take up to a year or longer to heal (Better Health Channel). In addition, those who become addicted to amphetamines will not be able to stop abusing them, no matter how harmful their effects are.

Are There Treatments for Amphetamine Addiction?

Yes. When a person becomes addicted to these drugs, they will need professional treatment in order to stop taking them. The first stage of treatment involves detox and withdrawal from the drug. According to the NIDA, “If stimulants are abused chronically, withdrawal symptoms––including fatigue, depression, and disturbed sleep patterns––can result when a person stops taking them.” Sometimes, the individual can need additional care in an inpatient facility, especially if they are experiencing symptoms caused by stimulant-induced psychosis.

It can take a long time for withdrawal symptoms from stimulant addiction to subside, and the depression and cravings can sometimes linger for months afterward. The individual will also need to attend therapy in some form in order to learn ways to fight their cravings and avoid triggers which could lead them to further drug abuse. Relapse prevention is a large part of treatment, and patients are taught ways to avoid this issue.

Amphetamines include several types of prescription drugs and other illicit substances, all of which are abused for their effects. Abusing these drugs can cost a person not only their health, family, and job but also their life.