Methamphetamine is a stimulant that is produced in clandestine labs throughout the United States. There is an FDA approved medication that includes methamphetamine known as Desoxyn although it is not commonly prescribed except for in severe cases of obesity and sometimes for ADHD. These methamphetamine facts will help you to better understand what methamphetamine is, how it’s used and the risks involved with such use.

When produced on the streets, methamphetamine looks like a shiny rock or piece of glass. It tends to come in various sizes and may even be in powder form. The most pure methamphetamine is usually not cloudy and contains little or no color while impure forms such as crank often are yellow or pink in color.

How Methamphetamine is Abused

Methamphetamine is abused in a number of different ways. It can be: 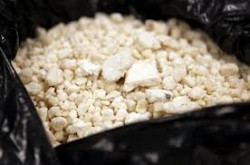 Crystal meth comes in a few different forms. One is a rock or crystal-like form shown here.

The method of use plays a key role in the level of the euphoric effects that are felt. Injecting produces the strongest and most dangerous high while ingesting the drug tends to produce a more prolonged and drawn out high.

According to the DEA, “researchers have reported that as much as 50% of the dopamine-producing cells in the brain can be damaged after prolonged exposure to relatively low levels of meth.” The effects of meth include:

Facts About Meth Use in the US